Smart Globalization is a compendium of leading-edge thinking on global strategy first published in the acclaimed MIT Sloan Management Review. The central premise underlying this book is that globalization can be a double-edged sword. The global or globalizing firm has the potential to reap several types of benefits such as the vast potential of a much larger market arena, opportunities to capture scale- and location-based cost efficiencies, and exposure to a multiplicity of new product and process ideas. However, globalization also exposes the firm to numerous strategic and organizational challenges emanating from a dramatic increase in diversity, complexity, and uncertainty – external as well as internal to the firm. How managers address these challenges determines whether globalization yields competitive advantage or disadvantage and makes the company stronger or weaker. “Smart” globalization is the ability to capture the benefits and minimize the costs and risks.

The rapid emergence of a multipolar and highly integrated global economy is making globalization the single most important issue facing companies today. In this new era, virtually every industry is a global industry and every business a knowledge business.

Anil K. Gupta, Vijay Govindarajan, and Haiyan Wang are among the most distinguished experts in the field of globalization. In The Quest for Global Dominance, they present the lessons from their twenty-year study of over two hundred corporations. They argue that, in order for a company to create and maintain its position as a globally dominant player, executives must ensure that their company leads its industry in the following four essential tasks: 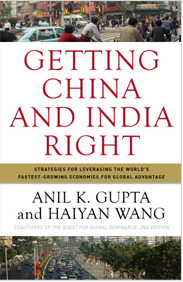 Many multinational corporations think of China and India largely for off-shoring and cost reduction and limit their marketing to the wealthiest few. With such shortsightedness, the opportunity of the century will pass them by, argue business strategists Anil K. Gupta and Haiyan Wang. To help business leaders develop robust global strategies in the age of China and India, the authors uncover the surprising range of the hidden opportunities and challenges presented by these emerging giants. They reveal the secrets to capturing the hearts, minds, and wallets of consumers there and to leveraging the complementary strengths of each country to achieve global dominance. 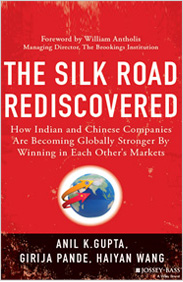 By 2025, China and India will be two of the world’s four largest economies. By then, economic ties between them should also rank among the ten most important bilateral ties worldwide. The Silk Road Rediscovered is the first book ever to analyze the growing corporate linkages between India and China. Did you know that: 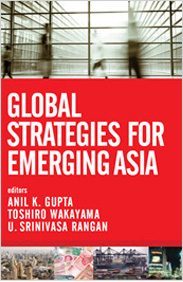 The multinational corporate guide for thriving in the Asian marketplace

Led by China and India, the rise of emerging Asia is transforming the structure of the global economy. By 2025, if not sooner, China will almost certainly overtake the U.S. to become the world’s largest economy. By then, India is likely to have overtaken Japan to become the world’s third largest economy, after China and the U.S. Besides China and India, Asia also includes other fast-growing economies such as Indonesia, Malaysia, Philippines, Thailand, and Vietnam. Added together, by 2025, these developments are likely to make Asia’s economy larger than those of the U.S. and Europe combined.

Along with my coauthor @haiyanwang, I’m honored to be included once again in the 2017 @thinkers50 rankings of the “world’s most influential management thinkers”

At #gpdf17, my central thesis is that #EmergingMarkets do not yet have the luxury of looking at growth as anything but a CORE imperative. Far too many of the world's 5 billion EM citizens remain in desperate need of better housing, better health care, and better education